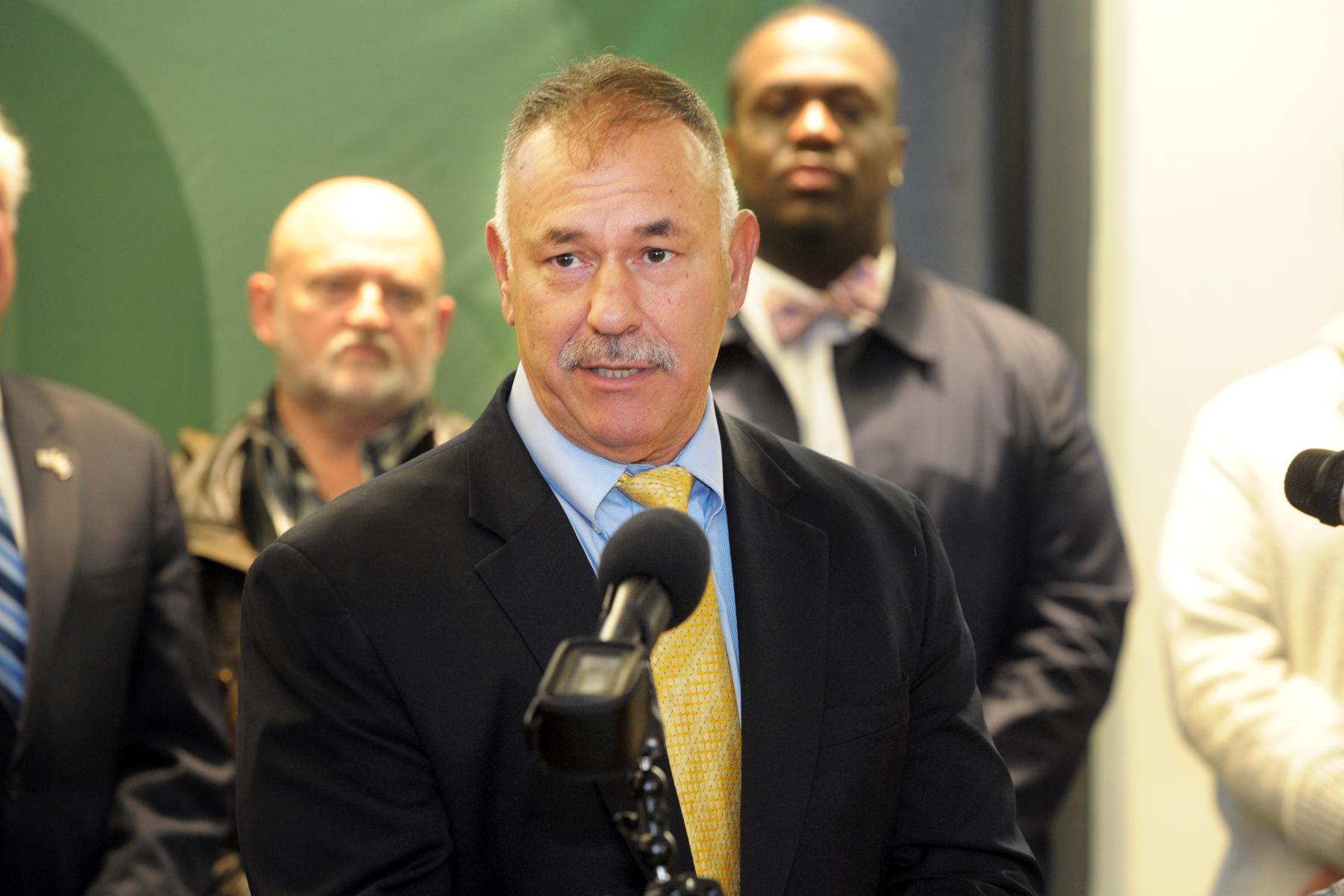 NORWALK — The concept for a new Norwalk High School was pitched at what some saw as an unexpected press conference shortly before the December 2019 holidays.

One of the key figures at this press conference was Konstantinos Diamantis, who at the time was director of the State Office of Grants and School Construction Review.

Diamantis is no longer employed by the state and is now at the center of a federal investigation into school construction projects.

While at least two Connecticut school districts — Tolland and Bristol — have received subpoenas as part of the investigation, Norwalk officials said Friday they were never “pressed” by Diamantis to accept offers from preferred contractors.

“We were never asked or forced to use any particular contractor or supplier. The city has a formal tendering and bidding process to select consultants and contractors,” said Laoise King, Chief of Staff for Mayor Harry Rilling. “This process is taking place independently of the (Office of School Building Grants and Review).”

In recent weeks, officials in cities such as Bristol, Groton and new britain alleged that they were pressured by the State Office of School Construction Grants and Review, when it was headed by Diamantis, to reject low-cost contracts with unionized contractors for demolition services and hazmat cleanup or to choose preferred contractors for school construction projects.

Demolition and hazmat cleanup services typically fall under emergency projects. None of Norwalk’s projects fell into that category, and the city did not use the state’s emergency contractor list, according to King.

Rilling’s chief of staff also noted that the city had limited interaction with Diamantis in its dealings with the school’s construction office. The city interacts primarily with OSCG staff.

“We are confident that the OSCG investigations will not delay or impact the Norwalk High School project,” King said.

The two main companies approved to work on the Norwalk High project are Kaestle Boos Associates Inc., an architectural design firm based in New Britain, and Gilbane Building Company, a construction management firm based in Providence, RI.

The term Gilbane appears in the federal subpoena issued to the state, according to public records obtained by Hearst Connecticut Media Group.

The new Norwalk High School was first announced on December 9, 2019 at a press conference attended by State Senator Bob Duff, D-Norwalk, former Superintendent Steven Adamowski, Rilling, and Diamantis. At the time, Duff called it a “historic day for our city” and Adamowski described it as a “game changer.”

The project was described as a 337,000 square foot facility that would be built in phases, include three educational programs and increase the school’s capacity to 2,000 students. Duff announced that the state would fund 80% of the project.

Critics were skeptical that the state would grant the 80% reimbursement rate, but the Connecticut Legislature ultimately approved the rate and $189 million for the project in September 2020. The district originally requested $225 million. dollars, which would have helped cover the cost of an indoor pool.

The announcement surprised many, including some school board members. They expressed concern about the “unverified” proposal and accused Duff of organizing the plan “in secret” without input from board members.

Duff responded at the time that he invited the superintendent and his staff, as well as the mayor and his staff, to meetings that began in May 2019. Adamowski said he didn’t think it was necessary to present the proposal to the board if they were not eligible for the 80% reimbursement. Officials said the city learned it had qualified for the rate a week before the announcement.

The reimbursement rate was based on the high school supporting an expanded P-TECH Norwalk pilot program. The pilot would allow students from outside the district with a preference for residents of Stamford and Bridgeport.

Former Board of Education Chairman Mike Barbis, who died last year, told Hearst Connecticut Media the day after the news broke that he had received verbal summaries of meetings regarding Norwalk High School over the course of summer 2019, but was unaware that the project would include a new building.

Critics were also concerned that the new high school could delay more critical projects already outlined in the city’s 2016 Facilities Master Plan, approved by the school board in the winter of 2015–16.

Almost every project on this list has been completed or is expected to be completed next year, with the exception of a renovation at 46 Concord St., CMS’s current headquarters, as well as the new South Norwalk School on the Nathaniel Campus. Ely, which was later determined to be an unsuitable site for the project by the State Department of Energy and Environmental Protection.

Funds budgeted for these two projects were reallocated last year and will go towards the construction of a new neighborhood school in South Norwalk once a suitable property has been identified. The district plans to move CMS to the lower campus of Ponus Ridge STEAM Academy, which was the biggest project in the 2016 master plan.

The meetings that began in May 2019 between state and local leaders stemmed from state-level concern over the many improvement projects the city was submitting for Norwalk High School.

In 2006, the district began a $42 million code update project at Norwalk High School, according to Alan Lo, building and facilities manager for the City of Norwalk in his recent recommendation to the Board of Education for design options for the new building. In 2017, further improvements were needed.

When announcing the new school, Rilling called these improvements a “band-aid approach”. About $5 million had already been spent, but the rest of the work was ordered to stop soon after the announcement.

As the school submitted applicable projects to the state for reimbursement, the state called a meeting to discuss the pending applications, according to Lo. The state indicated at this meeting that it would not support the funding of many small projects over the next 20+ years.

Adamowski told the board shortly after the announcement that Diamantis had asked the district to take a more holistic approach that would encompass all of Norwalk High School’s needs.

The plan for the expanded P-TECH program at Norwalk High was designed to meet the objectives identified by Governor Ned Lamont to find efficiencies between neighborhoods and reduce socio-economic segregation. These objectives were cited as justification for the 80% reimbursement.

The plan was finally codified in state lawwhich states that “The City of Norwalk may use the 80% Reimbursement Rate for the Norwalk High School New Construction Project, provided that the local school board in the City of Norwalk (1) establishes a high school in technology. at the new Norwalk High School and this program welcomes students from surrounding towns, with priority given to students from Stamford and Bridgeport.

As part of the refund agreement, Norwalk High School is also unable to prevent students not enrolled in the school’s arts pathway program from “joining or participating in any arts or of music offered as part of the regular school program or any extracurricular program”. program related to the arts or music.

The bill also said the city would receive a 50% reimbursement rate for the construction of a natatorium as part of the new Norwalk High School construction project.

At the time of the announcement, the project’s estimated completion date was 2023. About 18 months later, the Board of Education still has to decide between two design options.

The school board will review both designs again at its regular business meeting on March 15.