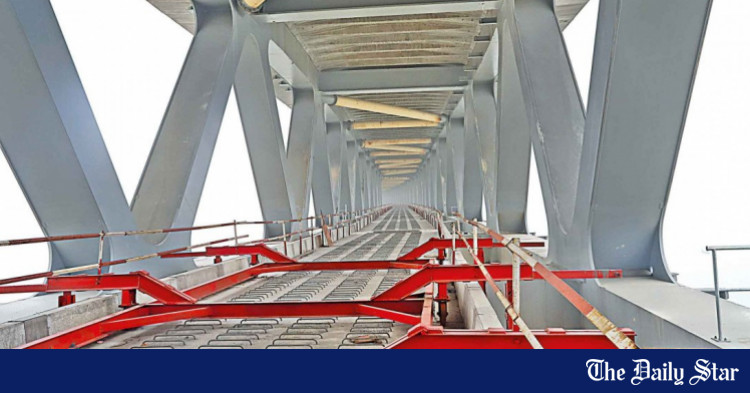 The lower deck of the Padma Bridge for rail communication. Preparations are underway to lay railway tracks there. Photo: SK Enamul Haq

The lower deck of the Padma Bridge for rail communication. Preparations are underway to lay railway tracks there. Photo: SK Enamul Haq

The Padma Bridge Project Authority will begin the process of handing over the structure to the Railway Authority tomorrow so that they can begin laying the railway track on the lower deck of the bridge.

Now, the two authorities will carry out a joint investigation and the surrender process can take up to a week. The rail authority is expected to start laying tracks within two weeks, officials said.

For all the latest news, follow the Daily Star’s Google News channel.

Md Kamruzzaman, Deputy Project Manager (Technical) of the Padma Multipurpose Bridge Project, said he would hand over the affected part of the bridge to the railway authorities tomorrow.

“It can take up to a week to complete the handover process,” he told the Daily Star today.

Afzal Hossain, project manager of the Padma Bridge Rail Link project, said they would start a joint survey as part of the acceptance of the structure and it could take up to two weeks to start installing the track.

BR is implementing the rail link project to construct the 169 km rail line from Dhaka to Jashore via Padma Bridge at a cost of around Tk 40,000 crore.

The two-tier bridge – road above and railway below – opened to traffic last month.

“We will try to complete the installation of the railway line for about 7 km in length of the bridge and its connection part in December this year,” Afzal said.

Bangladesh Railway had a plan to start rail operations as well as road operations on the Mawa-Bhanga section, but later changed the decision as the bridge authority refused to hand over the bridge before it opened due to “technical reasons”.

Visiting the project site yesterday, Minister of Railways Nurul Islam Sujan hoped that the operation of the train from Dhaka to Bhanga via the bridge can be started by June next year.